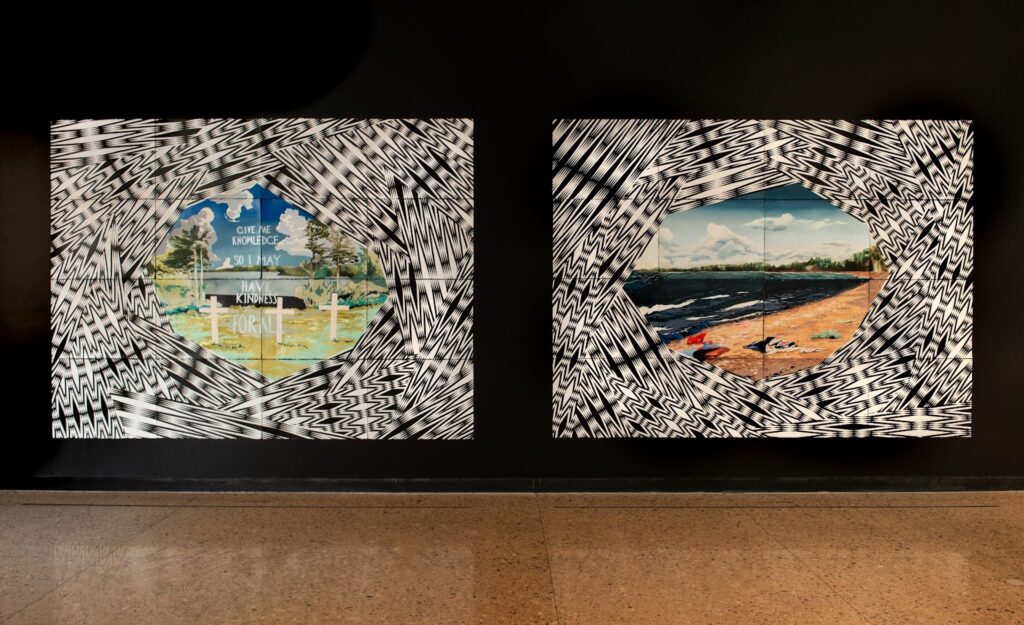 I'll Cut a Hole and Future Cache by Andrea Carlson, 2022

Oil, acrylic, gouache, ink, marker, and graphite on paper Courtesy of the artist

About the Art (in Anishinaabemowin)

About the Art (in English)

The word “cheboiganing” means “portage” or “passage through”; Carlson draws upon this notion in I’ll Cut a Hole and Future Cache, in which overlapping black-and-white patterns frame apertures onto imaginary views of Burt Lake.

I’ll Cut a Hole (left) looks onto Cheboiganing Band’s St. Mary’s Cemetery, one of the few remaining locations from the Band’s ancestral village. The cemetery holds the remains of Band members who died between 1885 and 1909. The painting’s title refers to a lyric from the spiritual “Swing Low, Sweet Chariot,” composed by Wallace Willis (born 1828), a formerly enslaved man granted citizenship in the Choctaw Nation after the Civil War (1861–65). Referring to heaven, the speaker says, “If I get there before you do, I’ll cut a hole and pull you through.” Hovering over the scene of memorial crosses is an Indigenous proverb: “GIVE ME KNOWLEDGE SO I MAY HAVE KINDNESS FOR ALL,” which is also found on the back of a sign in the cemetery.

In Future Cache (right), Carlson portrays a sandy beach along the blue waters of Burt Lake. The scene is based on postcards depicting idyllic views of white beachgoers, but in a reversal of the dispossession of the Cheboiganing Band, the colonizers, indicated only by their crumpled towels, have been erased from the land. This painting thus reclaims the lake from its current use as a commodified site for tourism.

Carlson has chosen paper as the support for these paintings because of its long history of being used in treaties and contracts in which colonial settlers employed abstract and confusing language to steal Indigenous lands.

Future Cache at the University of Michigan Museum of Art

In Andrea Carlson Future Cache, a 40-foot-tall memorial wall towers over visitors, commemorating the Cheboiganing (Burt Lake) Band of Ottawa and Chippewa Indians who were violently burned from their land in Northern Michigan on October 15, 1900. Written across the walls above and around the memorial, a statement proclaims Anishinaabe rights to the land we stand on: “You are on Anishinaabe Land.”
On View: June 11, 2022 through June 2024