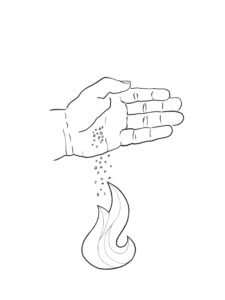 Many cultures have traditions regarding how and when to give thanks and make offerings. Always check with the elders in your family and community to learn more. It is especially common in the Great Lakes area for people to make small bundles and give one another medicines to be placed in a fire, on the ground or used ceremonially later.This card was drawn by Bernard Perley, whose art reflects his own Maliseet culture. It was created at the request of Jamie Kellicut who was asked to make small bundles for distribution at a meeting where people had business to do but wanted to begin with an offering in both Ojibwe and Potowatomi language. Both languages are considered Anishinaabemowin, or Neshnabemwin, and have many sounds and meanings and ways of being used in common. However, as you can see and hear, they each have their own distinct qualities.

We hope you use these phrases the next time you make or receive a small bundle of “asemaa” or “séma”!

Listen to these sentences to practice saying them on your own.

We are thankful to be here gathering today and we hope to consider things carefully in a good way. (English)