Shea Brushing Zion’s Teeth with Bottled Water in Her Bathroom 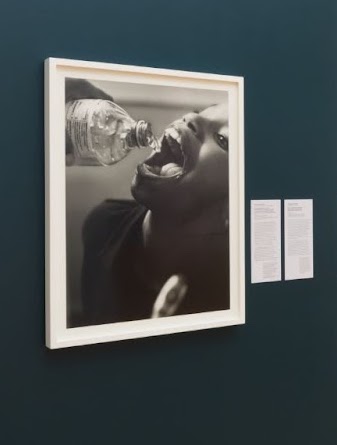 LaToya Ruby Frazier, Shea brushing Zion’s teeth with bottled water in her bathroom, from the Flint is Family series, 2016-17

Shea brushing Zion’s teeth with bottled water in her bathroom from the Flint is Family series
2016–17
Gelatin silver print
Museum purchase made possible by the University of Michigan Office of Diversity, Equity, and Inclusion and the Director’s Acquisition Committee, 2019, 2019/1.314

LaToya Ruby Frazier is an artist and activist committed to using her camera as an agent of social change. Shea brushing Zion’s teeth is from the first of three acts in her Flint is Family photo essay series, which focuses on the Cobb family from Flint, Michigan. The first act introduces the Cobbs—Shea, her daughter Zion, and her mother Renée—as they endure the consequences of the city’s devastating water crisis. The crisis began in 2014, when the city decided to save money by changing its water supply to the Flint River; inadequate water treatment and outdated pipes contaminated much of the city’s potable water with lead, which the government long denied.

Frazier lived in Flint with the Cobbs for months, documenting the challenges the family faced without access to running water. Shea brushing Zion’s teeth poignantly features the day-to-day consequences of the ecological disaster in Flint—making personal the broader human toll of clean water crises. While pipe replacements are planned to be completed in 2022 and financial settlements of lawsuits began in January of 2022, activists say further support for long-term illnesses caused by the contaminated water is needed.

LaToya Ruby Frazier’s three-part Flint is Family series will be exhibited at three venues across southeast Michigan this fall; organized by U-M Stamps Gallery in collaboration with the Eli and Edythe Broad Art Museum at Michigan State University, and Flint Institute of the Arts, the exhibition will be on view at all three venues from September 3, 2022 through January 2023.

Future Cache at the University of Michigan Museum of Art

In Andrea Carlson Future Cache, a 40-foot-tall memorial wall towers over visitors, commemorating the Cheboiganing (Burt Lake) Band of Ottawa and Chippewa Indians who were violently burned from their land in Northern Michigan on October 15, 1900. Written across the walls above and around the memorial, a statement proclaims Anishinaabe rights to the land we stand on: “You are on Anishinaabe Land.”