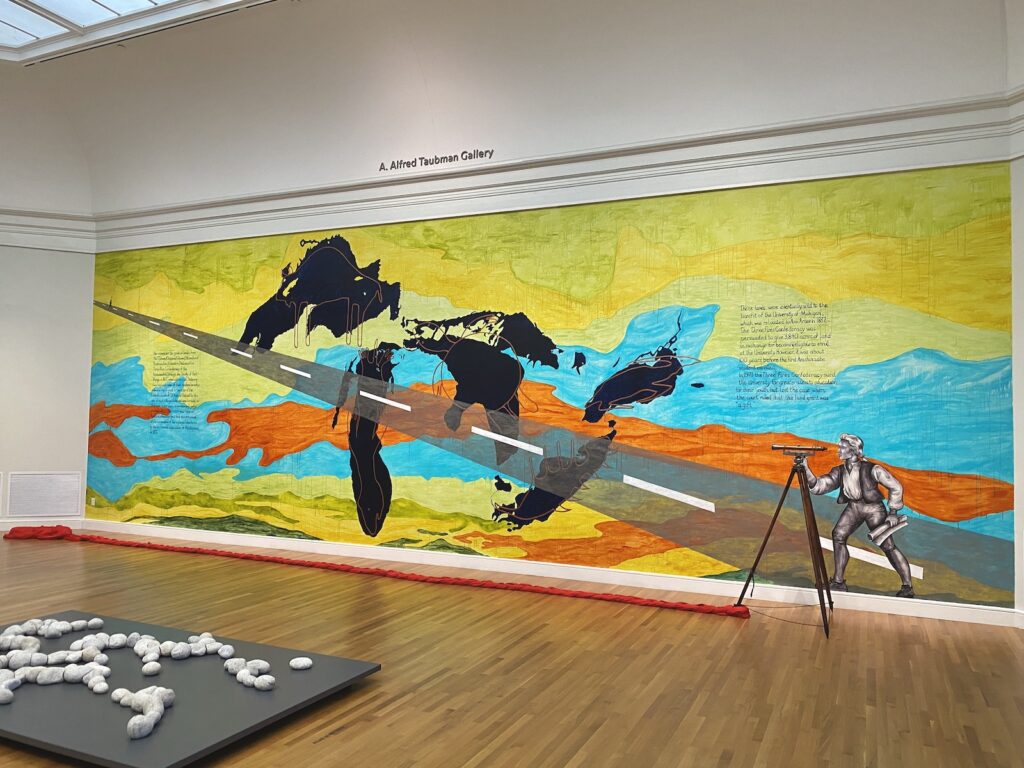 The Gift (in English)

The Gift
2022
Acrylic paint, graphite, ink, beaded felt, surveyor’s transit, and red cotton cloth
Courtesy of the artist
Commissioned by the University of Michigan Museum of Art for Watershed

Bonnie Devine’s The Gift draws attention to the removal of Anishinaabe people from the Great Lakes region, as well as their erasure from historical narratives. To visualize the human cost of settler colonialism, she uses the tools of the settler surveyors, including an antique tripod-mounted transit for mapping land; a vibrant red fabric braid suggests the Indigenous blood spilled to create colonial borders. In a re-mapping of the watershed region, violently bisected by a road, she superimposes the silhouette of an animal over each of the Great Lakes to emphasize the concurrent destruction of animal populations.

Framing the map are two commemorative texts: one (left) addresses the 1817 Treaty of Fort Meigs, in which the Ojibway (Chippewa), Odawa (Ottawa), and Bodewadimi (Potawatomi) Nations—known as the Three Fires Confederacy—granted lands in Detroit, including the University of Michigan’s original campus, to the state of Michigan having been falsely promised that Indigenous students could enroll at the university. The other (right) describes the establishment in 1891 of the Mount Pleasant Indian Industrial Boarding School, where thousands of Indigenous children were stripped of their languages, cultures, and families; 227 of them died. In this way, Devine draws attention to a legacy of displacement and exploitation that cries out to be addressed.

Watershed at the University of Michigan Museum of Art

Watershed was on display June 4–October 23, 2022. It brought recent work from fifteen contemporary artists to UMMA for an exhibition that immersed visitors in the interconnected histories, present lives, and imagined futures of the Great Lakes region.