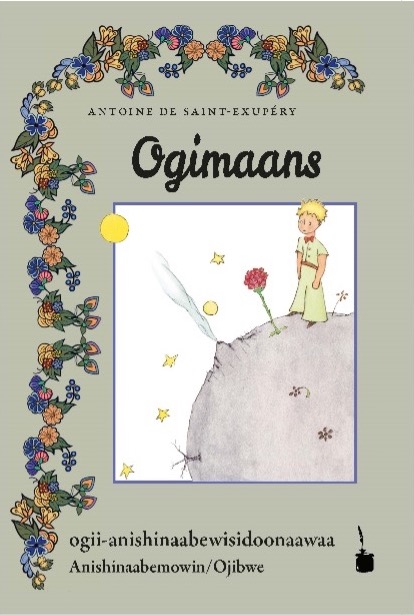 Ogimaans is the first translation of The Little Prince in an Indigenous language of the North American continent. Overall, the book has now been translated into 445 languages and dialects! Ogimaans is #134 by Edition Tintenfass. Edition Tintenfass hopes that The Little Prince will be translated into more indigenous languages of North America, and they would be happy to help.

Le Petit Prince is a story beloved by readers across the globe. It is an aadizookaan, an epic teaching tale, that speaks to our souls about the secrets and lessons of being alive. As it moves from one language to another the core meaning remains the same, but each translation offers a perspective on being that contributes to our shared understanding. For instance, when the little prince visits with the fox before leaving, we see through translation, the various ways separation and secrets are viewed. Moving between languages in the same Indo-European family, the differences are subtle. “Adieu,” dit le renard. “Voici mon secret. Il est trés simple: on ne voit bien qu’avec le coeur. L’essential est invisible pour les yeux.” is very similar to “Good-bye,” said the fox. “And now here is my secret, a very simple secret: It is only with the heart that one can see rightly; what is essential is invisible to the eye.” However, when the sentiment moves into a language of another family, in this case Anishinaabemowin, an interjection becomes a verb phrase and a promise to be together again. Additionally, the metaphors are entirely changed. There is no comparison between seeing with one’s heart or with one’s eyes. There is instead a reminder that by letting go of what is material one can best understand emotions and ideas. The literal translation of “Giga-waabamin,” ogii-idamini waagoshan. “Noongom giwii-wiindamoon gaadooyaan, wenipanag: Mii eta dash giwii-nisidawendaan apii boonigidetaazoyan bwaa-waabanjigaadeg maamawigichi-inendaagwag.” is close to: “I will see you again, said the fox. Now I will tell you what I have been hiding which is simple: You will understand when you let go of everything that the unseen is most important.” This is the magic of the little prince, by listening to him, we learn to listen better to ourselves and all the beings who have secrets to share.

Anishinaabemowin is the language of the Odawa, Potawatomi, and Ojibwe people centered in the Great Lakes region of North America. It is currently used in more than two hundred Anishinaabe communities in Quebec, Ontario, Manitoba, Saskatchewan, Alberta, North Dakota, Michigan, Wisconsin, and Minnesota. Like many indigenous languages, its vitality is precarious. Although some of our most beloved elders and teachers left us in recent years, the number of speakers is beginning to hold steady. What we write today will be the bridge our future children have to the past.

This edition conforms to the spelling used in the western part of the diaspora. A few practical facts bear repeating to encourage those not familiar with Anishinaabemowin to dive into a book filled with long lines in a new language. The spelling system used in this volume is called Fiero Double Vowel. Although this is the most common writing system in the southern Great Lakes region, there are syllabic alphabets, folk-phonetic systems, alternate spellings, and other vocabulary choices that make the language of each community distinct.

We thank the little prince, the fox, his rose and Antoine de Saint-Exupéry for the original story. We thank Edition Tintenfaas, Jean-Marc Probst, and all the translators before us for extending its reach. We thank the maanidog and aanikoobijiganag of Anishinaabemowin who created the language we continue to use. And we thank all the friends and family who encouraged us for the many years it took to complete this project, especially Walter and Nadine Sauer who always believed it could be finished one day.

You may purchase a copy of Ogimaans provided by Michigan State University Press by phone at (773) 702-7000 or online.
Purchase Now

Here are some of the most interesting or frequently used words from the translation.

Nouns with a parenthesis attached to it note the plural ending.

Over the years many of the quotes have become quite well known. Here are a few favorites!

“It is much more difficult to judge oneself than to judge others. If you succeed in judging yourself rightly, then you are indeed a man of true wisdom.”

“All grown-ups were once children– although few of them remember it.”

“And now here is my secret, a very simple secret: It is only with the heart that one can see rightly; what is essential is invisible to the eye.”

“Well, I must endure the presence of two or three caterpillars if I wish to become acquainted with the butterflies.”