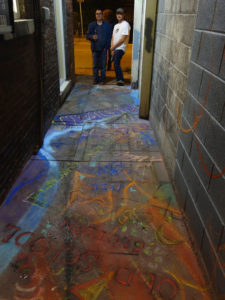 Mii gii biidaashkaa mii adaaweyaang
Then on waves of trade

Note: Angelique le Roy, was born in 1766, although the exact date is not certain. She was the daughter of Joseph and Maquerite le Roy and the granddaughter of Menominee leader, Ahkenepaweh (Standing Earth). Her uncle Onaugesa was the Menominee leader of the Potawatomis at Milwaukee. In 1786 she married Jacques Vieu, who was born May 5, 1757 in Montreal. He worked for the North West Fur Co. first in Mackinac and Madeline Island, then Green Bay.

With Jacques, she began a family and opened trading posts in gathering places west of the Lake Michigan shoreline. In August of 1795 they arrived in Milwaukee and were welcomed by Potawatomi and Ho-Chunk people living there. They settled in an area west of Milwaukee Bay. Together they founded the village of Milwaukee, later platted by their daughter Josette and her husband, Solomon Juneau.

In 1836, after witnessing a small pox epidemic she returned with Jacques to a farm at Green Bay. She was not in Milwaukee in 1838 when, following the 1833 Indian-removal Treaty of Chicago, the United States Army troops rounded-up and forced Milwaukee area American Indians to gather at the “Indian Fields” (near the present-day Forest Home Cemetery) and then journey in a caravan to Kansas and Iowa Territory.

Jacques and Angelique had eleven children. The oldest was Madeleine Thibeault, who is listed as Menominee and Ho-Chink and lived in Stevens Point, Wisconsin. Their son Paul, and at least four other siblings lived as members of the Potawatomi tribe in Kansas.

Angelique died in 1862 at the home of her son Joseph, in Lawrence, Wisconsin.