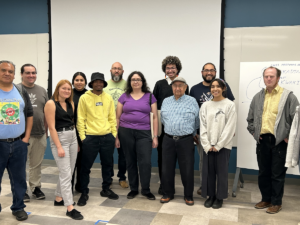 This Advanced Lesson on Aphorisms is by Alphonse Pitawanakwat. Anishinaabemowin is Alphonse’s first language and he teaches in Michigan at several locations including universities, urban native centers and tribal language gatherings. Alphonse has taught Anishinaabemowin at the University of Michigan for many years and is pictured here with current and former students who attended the University of Michigan 50th Anniversary of Native Studies in 2022.

Aphorisms are simple, always memorable, statements of truth. To create them requires talent, fluency in a language, and the wisdom of lived experience. Alphonse’s ability to translate the complex English aphorisms, requires creating them in Anishinaabemowin and demonstrates his skill in both his first and second languages. Much can be learned about both language and life from studying the games he has played with these words.

Please note: This work represents wording and spelling of Anishinaabemowin as it is spoken and written by speakers from Wikwemikong, where Alphonse is from. If your writing system or dialect is different, enjoy reading eloquence from another part of Anishinaabewaki.

When Nishnaabemowin revitalization started to be reported in the social media, I thought learning or relearning would be easier and move faster if seen in the internet more often and also encourage speakers of the language varieties to do the same. And for that reason, I decided to translate and write aphorisms, maxims, or proverbs to motivate communication by writing in the media. All these aphorisms were written in English and translated into Ojibwe including some of my own. Since then, the social media has been inundated with many variations of the Ojibwe language in many websites, including Zooming all over the U.S. and Canada, which is encouraging.

“It’s a strange world of language in which skating on thin ice can get you into hot water.” -Franklin Jones