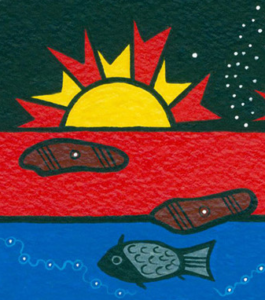 Written and sung by Margaret Noodin.

In 2015 the Fort York National Historic Site in Toronto, Canada needed a song for a carefully scripted virtual reality experience triggered by geo-location. Using a VR case and a smartphone, viewers gaze beyond the current landscape if the Fort, into the heat of past battles, through the chaos of settlement and back to the serenity of the shoreline as it was before colonization, industry and capitalism. The curators needed a song that might have been sung 500 years ago by people of the Mississauga culture. The request from Fort York represented an opportunity to teach lessons of linguistic and cultural change and survival. The challenge was to achieve ecological empathy that might invite further inquiry, not nostalgic pity for what cannot be recovered.

So, I watched fish, recorded frogs and listened to the tide coming in and going out. I considered those who are most delicious and useful and therefore also threatened in our Great Lakes and gave this Historic Site a song not for the fishers, but for the fish, for the speckled muskies lurking, the ribbon-bodied eels, the deep-story sturgeons, the ones with whom we share the water. These are the ones who once might have heard: “Gimiigwechwigo gii bagidenindizoyan. Thank you, for the sacrifice of yourself.” I tried to model the communal instinct to listen and respond. I offered a song that might teach all who listened the importance of knowing how to share the water.

Ezhi-maashkoziyeg
The way you survive

Gimiigwechwigo gii bagidenindizoyan. Thank you, for the sacrifice of yourself.