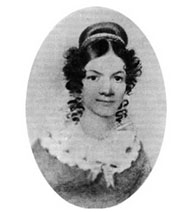 Jane Johnston Schoolcraft was born in Sault Ste. Marie. An Ojibwe (Chippewa, Anishinaabe) and the granddaughter of the revered chief Waubojeeg, she began as early as 1815 to write poetry and traditional stories while translating songs and other Ojibwe works. Literary scholars and historians consider her to be the first known Native American literary writer. As the wife of the Michigan Territory Indian agent Henry Rowe Schoolcraft, she continued her work, collaborating with him to document Native cultures. Some of her essays were originally published in “Literary Voyager” – also known as “Muzzeniegun.” Her stories were adapted and published by her husband, and became a key source for Longfellow’s popular epic poem “The Song of Hiawatha.”

As a poet, storyteller, translator, she is now attracting attention as an invaluable treasure of American and American Indian literature and history. She created a body of work that is recognized today as having an invaluable place within American literature. That place was further strengthened by the 2007 publication of her biography by Robert Dale Parker, which was named a Library of Michigan Notable Book.

Jane Johnston Schoolcraft lived during an extraordinary period in Michigan history and overcame persistent social conventions regarding women and Native Americans to create something of real value for the generations that followed. More than 160 years after her death, her work is widely studied in scholarly articles and published in literary anthologies.

* Variations of this song can be found in The Sound the Stars Make Rushing through the Sky: The Writings of Jane Johnston Schoolcraft edited by Parker, Robert Dale (University of Pennsylvania Press, 2007). This retranscription and gloss by John Nichols. Tune based on a round dance beat by Randy Wood and sung by Margaret Noodin.

Nyaa nindinendam
(Oh I am thinking)

Ishe naganagwaa
(I leave them far behind)

Beshowad e we
(It is near)

Ishe izhayaan
(As I go)

Ishe giiweyaan
(I am going home)

Nyaa nigashkendam
(Oh I am sad)